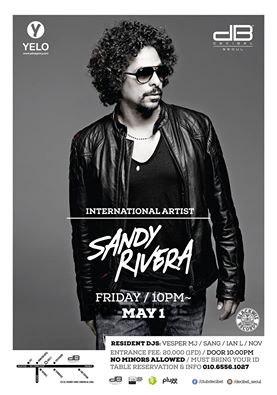 Register on the guest list and the entrance fee will be 10,000 KRW (1Free Drink) until midnight
http://goo.gl/forms/yHsNJiZw1e

As one of the most highly regarded producers of his – or any other – generation, Sandy Rivera’s place in house music history is already assured. Recording under both his own name and his legendary Kings of Tomorrow moniker, Rivera’s unparalleled creativity and gift for forging timeless house records have placed him in a league of his own, and without him the house landscape would boast a far less richly coloured vista.
Elements from soul, funk, disco, techno, pop and everything in between are commonplace in his records, Rivera drawing on the myriad influences Puerto Rican heritage and New York upbringing to craft records that are at once familiar and utterly unique.
In years to come, Sandy Rivera will be looked back on as one of the true greats to the scene; a pioneering artist whose passion for house music is continually realised in the music he creates. For now though, with the 20th anniversary re-brand of Blackwiz just around the corner and the re-launch of his seminal label Deep Vision, he’s still busy creating his legacy: long may he continue.