DJ Jinwook has worked in the fashion industry before becoming a DJ in 2000. He is a vinyl collector and the owner of the fashion label Disco Surf. Golmokgil met him in his shop in Hannam-dong 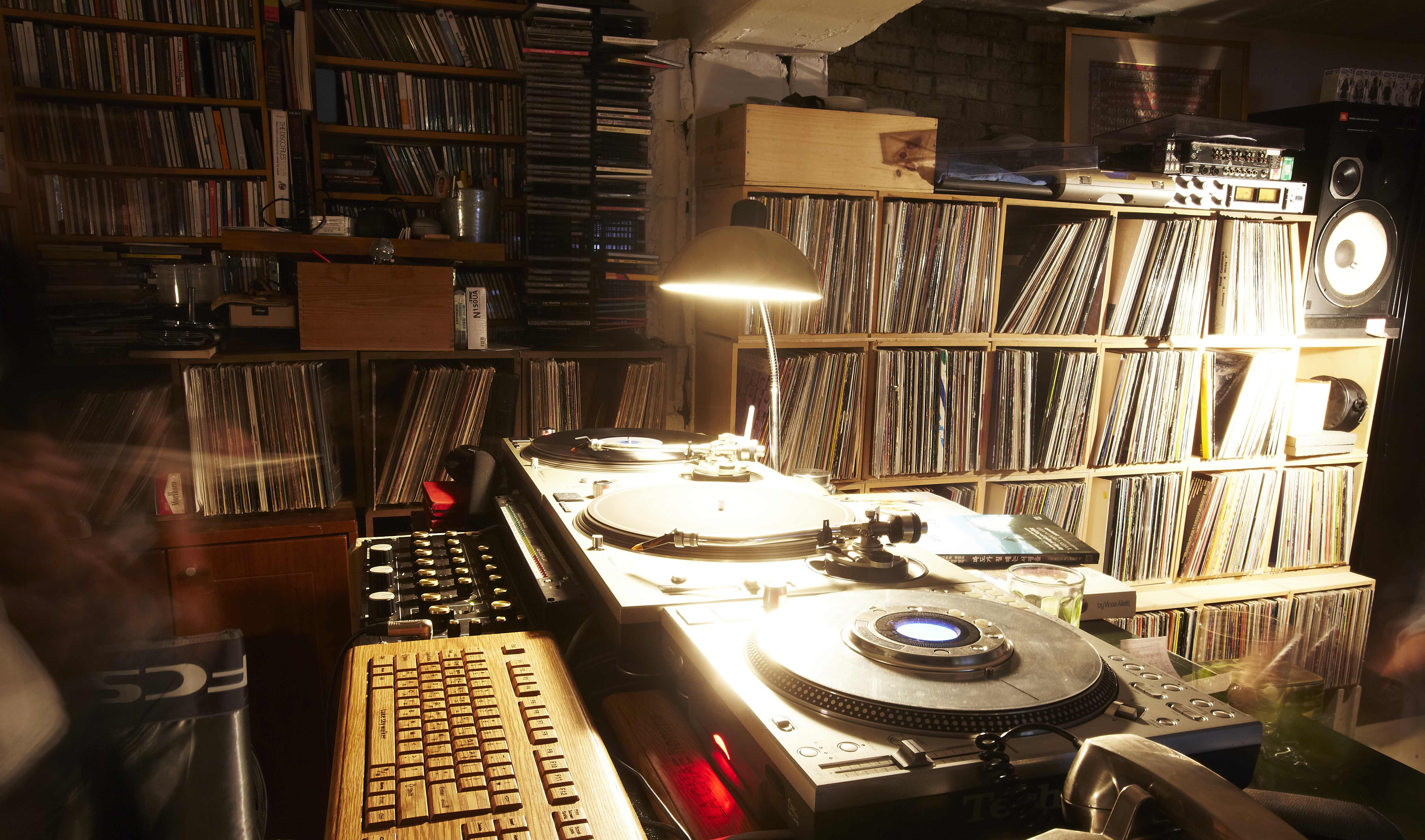 Hi, Jinwook. Thanks for inviting me to this awesome place. Could you please tell us a bit about Disco Surf? How come you opened this shop?
I chose the name because Disco is just my musical thing and surfing is my hobby. I simply love both… I have managed Disco Surf for about 2 years and it’s definitely not for commercial purposes. Only my friends are coming these days, although I had a lot of customers in the beginning… haha. I started to sell some clothes and caps recently, but as you can see this place is mainly a workspace for music.

Indeed, you’ve collected a massive collection over the years. How do you usually find your records?
In the beginning, I just ordered online, but since the shipping is so expensive I needed do it more wisely. Now, if I find a record I want on Discogs, but the seller lives far away, I just order 50 more vinyl from him that was not on my want list actually. The overall fee is higher, but the price for a single record is lower. I also started to go to record shops in Japan, New York, LA and London. Japan is very close, so I often went there. I worked for an advertising company before got involved in DJing, and I had the chance to travel. In New York for instance, I was lucky to find some House records that have been played at clubs like Studio54 or Paradise Garage. I also visited the Winter Miami Music Conference four years ago, and because there are so many factories producing LPs in Miami, shops there are great for digging. Staying in London for five or six months was great as well. Even though I had a main job at that time, I was really excited to enjoy music. Lately, I went to L.A. and bought lots of Disco records from the 70’s. That has been my last visit abroad.

How did you get into music so deeply?
I started DJing for fun at first. After I finished my military service in 1996, I met guys like DJ Ziro who was playing House music in club M.I., Beejay, resident of Octagon, or Yeonjun, who’s now the owner of Mystik. I picked up some skills from them and started to get some equipment. In 1999, I started to play regularly on weekdays for one or two hours after working at the bar Chung in Chung-dam and at the weekend I played in M.I. But I made the final decision to become a serious DJ literally by accident in 2000: I almost died when I was on my way from New Zealand to Korea. The airplane broke and had to make an emergency landing on Fiji. On that day I decided that I will only do what I really want: DJing. So I quit my job and sold my car to buy more equipment. It was a huge turning point in my life.

I see why you’re so passionate about it.  Could you describe your musical style a bit more? If you had to put it in a word, which one would it be?
Soulful. I love soulful music no matter what its genre is or whether it has vocals or not. I particularly enjoy using instrumentals to control the energy level of the dance floor. For example, I usually play them right before the blowoff to tease the crowd and make them hungrier for the explosion! When I pick the tracks for a gig, I usually choose high quality ones that are well mixed and well mastered.

How about your mixtape?
My mix is actually the snippet of a more than 7 hour live set that was recorded in Venue. I played lots of different types of music that night: House, Soul, Funk, Disco and so on. The part I chose for Golmokgil is about 90 minutes and contains a lot of Funk and Soul. I had considered publishing the whole set, but it would probably be too long to focus on it anyway, so I decided to shorten it. Anyway, that long live set also was so interesting for me to listen to. Generally, I like live sets more than home recorded computer mixes and that’s why I’d like to share this one with you. It’s very special to me and brings back all the sweet memories of that night, even though two years have passed already.

Cool! So, among other you really love Funk and Soul. How did you get attracted to that kind of music?
Well, some people might say those genres are old and that’s true to some extent. But I just enjoy discovering all that tunes and subcultures, although you can’t look back endlessly. However, I love the feeling of digging deeper and deeper and sometimes that old music seems more creative to me. They are also often very well mixed and mastered, I think.

Now, I’m a bit younger and for me it’s not always easy to understand those tunes. I don’t have any memories of that time, so to be honest it often rather feels like studying something that has passed long ago. It’s hard sometimes to keep up listening and ‘studying’ the history.
Well, you shouldn’t get stressed by that. It totally depends on you and you should make it your way. In my case, I just find labels, artists and tracks, and then try to slowly discover the history. But that’s not the Holy Grail. So much music has been released and will be released, so it’s okay to just follow the paths you like. That will totally be enough. You know, it’s been 15 years since I started DJing, but it’s still difficult for me to keep up with latest trends all the time. It’s exhausting to listen to everything. Instead, just follow your heart and go your own way.

To make things a bit easier for us young fellas, could you please recommend some of your favorite artists?
I like African sounds these days and I went on a tour with Louis Vega and Luisito Quintero to Hong Kong recently. They are my favorite artists. Soul Clap is remarkable as well and if I had to choose older guys, I’d go for Deodato, Roy Ayers and Spinna.

Now, in Itaewon at least, this diversity of styles is respected, but it is still not easy to listen Funk, Disco and Soul in Seoul very often. DJs like you can’t play this music frequently, right?
Hmm… I play those music once or twice a month in Mystik where they usually spin Techno, Minimal and so on. I think I could refresh the venue with my old tunes and people are enjoying my sets. However, to some extent, it’s definitely true that others are not really into it. Many people also simply follow the trendy stuff and my music is just too old for them. I hope there will be more chances to play that stuff on the long run.

Do you generally think that there has been an evolution in the Korean underground scene?
Above all, I want to mention the guys from Cakeshop who are really trying to push diverse music. Overall, however, I feel that DJs are losing their identity in the scene and people are not visiting clubs to listen to music anymore. For instance, when DJs like Spinna or Dimitri from Paris are coming, many people just think “Wow, famous DJs! Though I don’t know who they are, let’s go check them out!” They don’t even mind what they play or when they play and they don’t have an eclectic taste in electronic music actually.

Also the industry nowadays seems to be more focused on digital DJing and since it technically has become so easy to mix two tracks together, some people argue that this mixing style is boring and demand more technical DJs.
The same thing happened in the old days: some DJs were focused on scratcing/turntabelism for more than just track by track mixing and others showed long set with 2 or more decks. Those aspects will continue even though the industry changes. I can play with standard equipment like CDJs and DJMs, but personally I love to use an analog rotary mixer from UREI. I think almost every DJ, even digital DJs, are recognizing the value of the old stuff, of analog gear and old music. Analog will never die….hahaha. 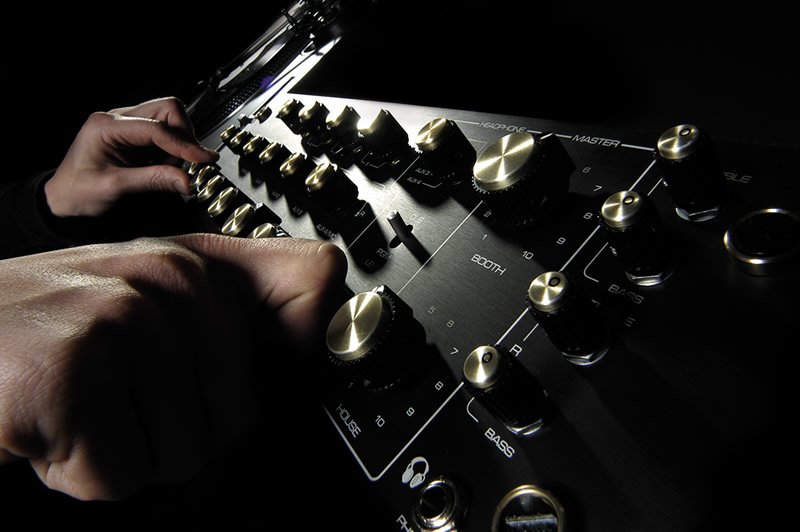 By the way and while we’re at it, I had an idea recently: I would like to host a kind of listening session in my shop. Anyone can bring vinyls and just play his tunes or mix with my UREI if they can. Not for any commercial purpose. I just want people to share their sounds. Takamiya Eitetsu (A.K.A Big Bee) did something similar in Japan for example. Digital DJing will grow anyway – and I hope things like that can help analog stuff to keep going.

Well, thanks again for the interview. Before we finish please let us know, do you have any plans or projects for the future?
I haven’t planed anything yet and I’m a bit busy promoting my brand ‘Disco Surf’, but I’ll play for Mystik and some brand parties like Louis Vuitton in the near future.

It was really a pleasure to meet you today!