You might have seen him around Seoul these days. He brings bunch of vinyls to every party and pleases us with his unique disco and house music. We could feel bright and positive energy during the interview in a cozy cafe in Itaewon. 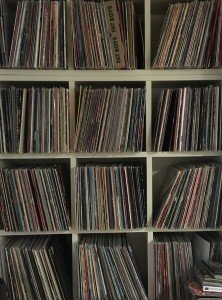 Hello Jesse! How are you doing these days?
Super fine. We had the last Playlists party with Jinwook, Stuf, and Plastic Kid on the new year’s day. We also had our first anniversary in November and are very proud of it. I’m also regularly playing at Codex which is organized by Akimbo and we made that one on Christmas. [haha]

You are also working for the magazine GQ as a editor, right?
True. It’s actually been my main job for 7 years. I mainly take care of  music and sports, but I’m also involved in other stuff. I am a music lover for a long time, but not very long as a DJ.

May I ask you about more of your GQ life before we get into the music? Would you tell us about your latest article?
I did an interview with San E for the January issue and Keith Ape for the special issue of December, ‘Men of the Year’. Hip hop has been an issue in all sorts of media lately, so we also wanted to cover it. Of course, I love hip hop and I was a “hip hop kid” at my young ages. I felt this very intense attraction for music at high school ages and it became an important part of my life from then on. So it is also personally of great significance.

Since when do you collect records then?
CDs from my young ages and it’s been about 7 years now that I started getting into vinyl. I was not a DJ back then and bought them only for listening at first. But after a while, I wanted to DJ with my collection. This happened only 3 or 4 years ago… what a short DJ life! I mainly collect 12” single vinyls after starting dj because they normally have a better sound quality. Oversea buying has increased since then. [haha] 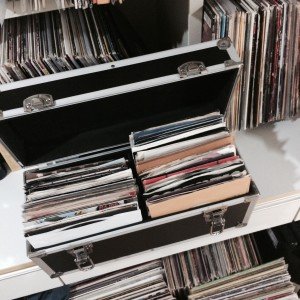 What about digital formats? There are many clubs in Seoul that don’t have turntables, so you might have some issues every once in a while… Do you play CDJs as well?
I tried it not long ago. It was for a Christmas party, but I just have a few Christmas records in my collection, so I copied some mp3s on a USB and tried CDJs. However, I messed up. It was not very good idea to use unfamiliar equipment to play out…

But many DJs nowadays find CDJs most convenient. How come you still prefer turntables?
It’s unique, but I got what you are saying… it’s too heavy to carry records around all the time and there’s too many factors affecting sound, so sometimes you are not having a clear sound. However, for me it’s just very intuitive. You put the needle on the record and it scratches the surface to play the sound. I just prefer it this way.

Moreover, I would like to enjoy it as it was created back then. If the new album of Drake is released now on LP, I won’t be interested in.

Do you believe playing vinyl has a positive effect on the dance floor?
At least, people are more likely to be interested in the DJ. It’s visible and the DJ handles something thin and circle… so it arises curiosity to some people who are not familiar with it. [haha]

BTW, It’s not easy to check other people’s library, no? The audience only notices what DJs play during a set or on a mixtape. What have you been collecting since you had started?
Well, 12” singles mainly go with disco/boogie and more of house at the moment, but I have jazzfunk for listening, too. I bring some of it to play at clubs too, like George Duke, Roy Ayers and Idris Muhammad.

And where do you get your inspiration from? You playing out a lot, so you definitely constantly need to look for new input, right?
I will visit and check my favorite online record shops like Juno, Phonica and Rush Hour. It’s a must to do for DJs. Sometimes, I just listen some mixtape of my favorite DJs and then search their track lists and another artists related to them.

Would you recommend some of your favorites tracks?
Out of the blue… “Tik Tok” by Sadar Bahar. It’s an edit version of “Tic Toc” by Carrie Lucas. Not every edit track is good, but this one is really nice.

It’s a bit weird to ask you about the Golmokgil mixtape in the middle of interview – but we have to…. [haha] What can we expect from it?
I’d say it’s my ‘records of 2015’ mix. I considered calling it ‘best of 2015’ at first, but this sounds too…spectacular. I just picked kind of my favorite records that I got this year and some of them were reissue or compilation which is also out in 2015. The mix contains AOR(Album-Oriented Rock), disco of various countries mostly. Additionally, I would like to express appreciation for Graye to check the sound quality of it.

How would you describe you own style??
Well, I’m trying to include many different styles and genres and I mainly got influenced by the 70s/80s club culture in New York – Paradise Garage and so on. It was a time that was full of new music like disco, proto-house, hip hop, post-funk and more – and there wasn’t a specific genre that was main stream. I feel pleasure to introduce this sound and the artists of that era to the people today. It was a special time for music, so it’s worth to keep this sound alive.

As a professional, do you like reading our interviews? And if so, which one do you think was the best so far?
Jinwook’s! The most important thing for interview is communication between interviewer and interviewee. A one-sided conversation isn’t good for an interview. You know, Golmokgil is closely connected to this scene and has good relationship with the artists here. It’s so powerful.

Thanks for the kind words. Let’s move on to another topic. Tell me about the night you felt impressive.
Definitely the 1st anniversary party of Playlists! I was excited to have run it for a year. Many guests came even though there was a heavy rain. Another special event was the Mantra rooftop night supported by Curtis and Eugene Blake. They made it at a empty office reminding me of a private loft. It cent by natural to play all of my all-time favorites and some rather unknown disco… It was also Halloween, so there were a few girls costumed as disco girls. [haha]

So you’ve had a few special nights here in Seoul … What do you think is the unique feature of the local scene? Many tourists visiting Seoul have sent message to us to ask this. What would you asnwer them?
It really depends on the location, but at least people respond to the music quickly which is both good and bad at the same time.

Which is your favorite club then? And where do you enjoy playing most?
First off is definitely Pistil! Dare to say, It feels like my home ground. They seem to give full respect to DJs once they trust them and I hope this year will go well, too. The next one would go with Cakeshop. I used go there as a guest when it started. The third one is Alley Sound. Their sound system is so well-equiped, the DJ booth is large and they are recently booking nice DJs as well. When it comes to non-clubs, 학쌀롱 (Haksanlong) managing TMI and 신도시 (Sindosi) with occasional events.

Can you give some tips for the beginners reading this interview?
[haha] Can I? I could say “set up a plan for digging, searching and exploring”. It could be enough to dig and purchase tracks randomly for playing, but you should have your own way and system to present your taste to others. It’s okay to explore following just certain labels, but you should have your own style at least.

What is essential for being a good DJ in your opinion?
I’m more likely to focus on the sound rather than define genre, so we need to pay attention all the sounds that make a track. DJs should care about the details more than just say “I like disco!” or “I like house!”. When doing so, they can maintain a specific sound in various genres.

Have you seen the TV show, Headliner? It kind of made DJing popular here in Korea, right?
I checked almost all of it except for the final show because I didn’t care who would win and I didn’t want to watch it as a competition. I would more regard it as a documentary as they were showing the whole process of DJing. Yes, I know there are some disputes about this show… but I Think It surely didn’t have any negative effects on the scene.

Do you have a roll model? Mo matter whether it is a musician or not….
Larry Levan from Paradise Garage. I actually used to wear his shirts everyday for one year until finally my friend told me not to do that anymore…

Alright, last question! Do you have any plans for the future?
You asked me about the scene of Seoul earlier, then I would love to play abroad this year! And I will surely keep collecting records so I don’t get tired of my library. That’s all, I guess. Thank you!

Thanks for the interview today!
Hope to see you around soon. Bye-